Although we've discussed Dragonfly and Gravestone doji in the past, we never got around to explaining the simplest of all candlestick patterns: the basic doji, sometimes referred to as a "Doji Star." Resembling a plus sign or a cross, the doji candlestick pattern is formed of just one candlestick, and it is incredibly common. Although there are several different types of doji (such as the Gravestone, the Dragonfly, and the Long-Legged), which we will describe briefly, today we're focusing on the classic, original doji. To learn how to identify this informative candlestick pattern and interpret its presence, simply scroll down. 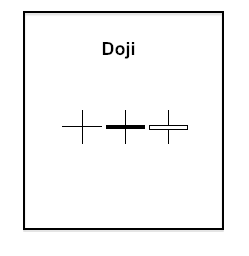 The doji is the smallest and simplest of all candlesticks, making it very easy to spot. First, the open and close of the candlestick must be at (or near) the same price level, so that the doji either lacks a body or has a very tiny body. Second, there must be an upper shadow, a lower shadow, or both. That's all there is to it!

The horizontal line of the doji shows that the open and close occurred at the same level, while the vertical line represents the total trading range of the timeframe.

As we mentioned above, there are a few variations on the classic doji shape. If the doji you've spotted differs slightly from the norm, you may have one of these candlesticks on your hands:

Although the doji has a simple shape, it signifies an important change in the market: a moment of indecision. When you see a doji candlestick pattern, you know that the market closed very near to where it opened, which is why there is not a real body. Indecision reigns, as neither the bears nor the bulls are in control. A "tug-of-war" is occurring, during which neither party is dominant. Although the price may have fluctuated throughout the day, it was driven back to its original, opening price. This moment of indecision, illustrated by the doji, often precedes a reversal trend. Depending on how the market progresses, the doji can be viewed as a bullish or bearish reversal candlestick.

Now that you've learned what doji look like and what they say about the current market sentiment, are you ready to test your knowledge with some real-life examples? Scan through the four samples below, and try to ignore the arrows and labels at first. Pretend that you're viewing these Japanese candlestick charts on your own. Do you think you could spot the doji? And if you had spotted the doji candlestick pattern, would you have made the right decision regarding your trades?

In this first example, you can spot numerous doji throughout the timeframe of the candlestick chart. We've marked three prominent examples, two of which are long-legged doji that foreshadow strong reversals. After each of these moments of indecision, a reversal occurs. The first is quite significant, while the second is slightly less impressive. Notice how other doji within the chart do not foreshadow reversals. The key is to look for doji that follow an uptrend or downtrend. 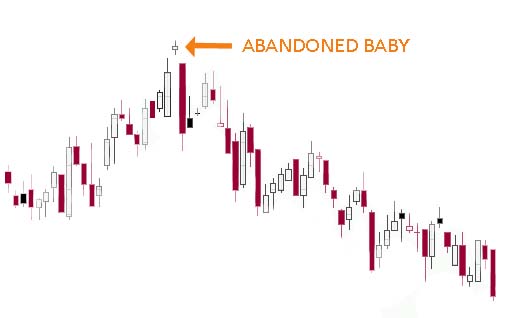 In this example, a period of bullish strength leads to an extremely rare Abandoned Baby candlestick pattern, which centers on a doji candlestick. The initial uptrend ends with a long bullish candle. After a gap up, we see a doji, and then the market gaps down to a long bearish candle. Although uncommon, the Abandoned Baby is a very reliable pattern. In this case, the pattern successfully predicted a downtrend. Although there are short up and down movements within the larger downtrend, the price does decrease in the long term. 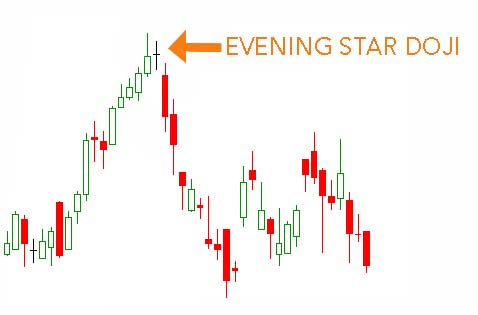 In this example, we see a doji candlestick pattern taking part in an Evening Star candlestick pattern. The bulls are in control and push the price up during the first section, forming an uptrend. This ends with a bullish candlestick, which is followed by a doji candle shaped like a cross. This moment of indecision forecasts a reversal, and the bearish candle that follows (completing the Evening Star) confirms that the price will drop. In addition, because there is a gap between the doji and the subsequent candle, the odds of a reversal increase. As expected, the price decreases after the appearance of the Evening Star. 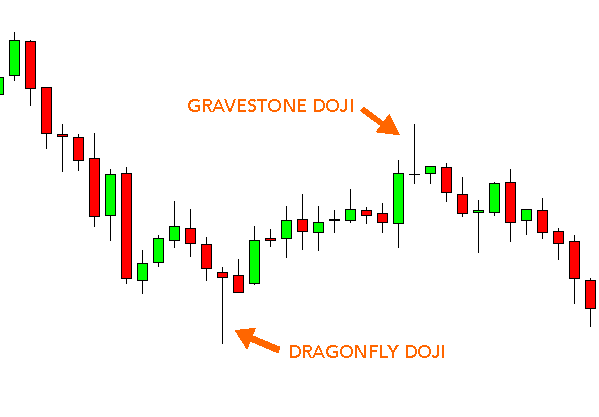 In our final example, you can view two doji candles that resemble a Gravestone Doji and a Dragonfly Doji (they aren't perfect examples) in action. Although you can spot other doji within the chart, let's focus on the two labeled examples. First, you can identify the pseudo-Dragonfly by its long lower tail. Due to its short upper wick, it is not a true Dragonfly. However, like a Dragonfly, it predicts a bullish reversal, which ends up being slow but steady. Next, the pseudo-Gravestone lacks authenticity due its short lower wick. However, like a Gravestone, it successfully forecasts a bearish reversal, which occurs shortly thereafter.