Just because a thing is small, that does not mean it is insignificant. Take the Doji candlestick signal! Typically resembling a plus sign or a cross, this small signal (formed of just one candlestick and lacking a body) is still important. In fact, it has the power to change traders' buying and selling strategies. And when a basic Doji lacks an upper or lower shadow, it becomes either a Dragonfly or a Gravestone Doji. Although similar in appearance, the Dragonfly and the Gravestone have very different implications. To learn how to identify and translate these opposing signals, please scroll down . . . 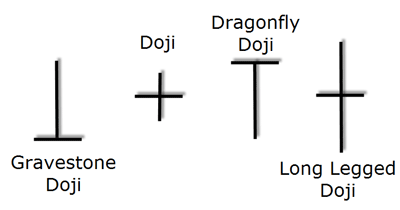 Doji are the simplest of all candlestick patterns, so they're very easy to identify. Both the Dragonfly and the Gravestone Doji lack a body. The Dragonfly has a long lower tail but no upper tail, and it resembles the capital letter T. The Gravestone has a long upper tail but no lower tail, and it resembles an upside-down capital letter T.

As you might have guessed from their opposing structures, Dragonfly and Gravestone Doji also have opposing implications. The Dragonfly is bullish, while the Gravestone is bearish.

A Dragonfly Doji conveys that the price opened at the high of the time period. There was a great decline during the session, and then the price closed at the high of the session. So the open, high, and close are all the same (or about the same) price. This signal's presence is most significant when it appears after a downtrend, preceded by bearish candlesticks. It suggests that the trend's downward direction may soon reach a turning point.

A Gravestone Doji, on the other hand, conveys that the price opened at the low of the time period. There was a great rally during the session, and then the price closed at the low of the session. Thus, the open, low, and close are all the same (or about the same) price. This signal's presence is most significant when it appears after an uptrend, preceded by bullish candlesticks. It suggests that the trend's upward direction may soon reach a turning point.

Doji are trend reversal indicators, especially if they appear after an upward or downward trend. A basic Doji signifies indecision, but Dragonfly and Gravestone Doji have bearish and bullish implications. So if you spot one of these simple signals, pay attention! It may be trying to tell you something.