In the real world, an abandoned baby is a startling and terrible sight. In the world of candlesticks, it is a very rare reversal signal. Sometimes the abandoned baby will be a bear (or should I say a cub?), and other times it will be a bull (a calf, if you like). Either way, it signals that the current trend will soon reverse. Happily, its formation fits its name quite well—a tiny doji on its own (the baby), the surrounding candles a step higher or lower (the parents)—so it is easy to identify. If you would like to understand the Abandoned Baby candle pattern, you're in the right place. Today we're discussing how to spot it, what it means, and why you shouldn't ignore its presence. 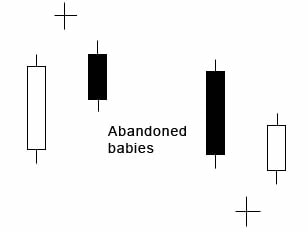 You can't react to an Abandoned Baby if you can't identify it, so let's start by discussing its formation. This pattern is formed by three candles: one doji and two candles with real bodies. To confirm your sighting of it, look for the following characteristics:

It is very important that there are gaps between the first and second candles as well as the second and third candles. Neighboring candles must not overlap. If they do overlap, you might have spotted a Morning Star or Evening Star candlestick pattern instead.

As you can see, this is a reversal pattern. After a solid uptrend or downtrend, there is a pause, a moment of uncertainty (depicted by the doji). Then, the momentum suddenly shifts. If there had been an uptrend previously, the bears take control and push the price downward. If there had been a downtrend previously, the bulls take control and push the price upward. This rapid switch conveys a strong reversal. The larger the gaps, the greater the reversal.

Despite its rarity, the Abandoned Baby is exceedingly reliable. However, just because it has a solid track record, that doesn't mean you should trust it without reservation. Before you make any big moves, be sure to check for confirmation. Good luck!