There’s just something about the number three: the Three Bears, the rule of three, the Three Billy Goats Gruff, the Three Stooges, the magic number on Schoolhouse Rock, the number of times one must say Beetlejuice . . . Don’t believe me? Read that first bit twice more. After all, the third time’s the charm! If you find threes to be particularly lucky, you will certainly be interested in learning about the Rising Three Methods pattern, a bullish continuation signal that includes three short candles and two long ones. To learn more about this pattern’s formation and meaning, please scroll down in one . . . two . . . three!

If you spot the opposite of this formation (a long red candle, three short green candles contained within it, and another long red candle that closes below the first), you’ve likely spotted this pattern’s brother: the Falling Three Methods pattern. It typically follows a downtrend, and it acts as a bearish continuation pattern.

The bulls are dominating the bears. This is very clear from the presence and formation of the first long, green candle. However, they stutter a bit after that. The price stagnates and three (or more) little candles are formed within the range of the first candle. The bears are pushing for a comeback, but they aren’t able to force the price lower than the original candle. In the end, they’re overcome once more by the bulls, who push the price strongly upward, forming another long green candle. From this we can conclude that the bulls are still in control, and the uptrend will continue.

The longer the green candles, the greater the bulls’ power.

Now that you’ve learned about the formation and meaning of the Rising Three Methods candlestick pattern, do you think you could spot it in the wild? And if you did spot it in the wild, would you know how to react? Just as there is a difference between “book smarts” and “street smarts,” there is a difference between understanding a candlestick pattern in a lesson and identifying/interpreting it in the real world. Use the examples below to test your proficiency. Try to ignore the purple arrows at first (hard as that may be) to see if you can spot the Rising Three Methods pattern on your own. 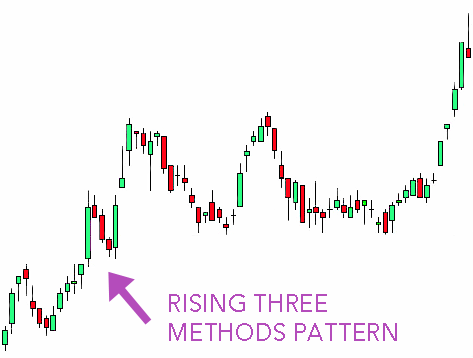 Have you ever considered the similarities between certain candlestick charts and rollercoasters? Like a rollercoaster that gradually builds the level of excitement, this chart begins with some small hills. The second descent forms a Rising Three Methods pattern. Three short, red candles are sandwiched between two long, green candles. The patterns follows a modest uptrend, the bears seizing control from the bulls. However, during each of the three sessions steered by the bears, they only manage to push the price down slightly. After the third candle, the bulls fight back and prove their dominance by creating a colossal green candle that closes slightly above the previous green candle’s close. 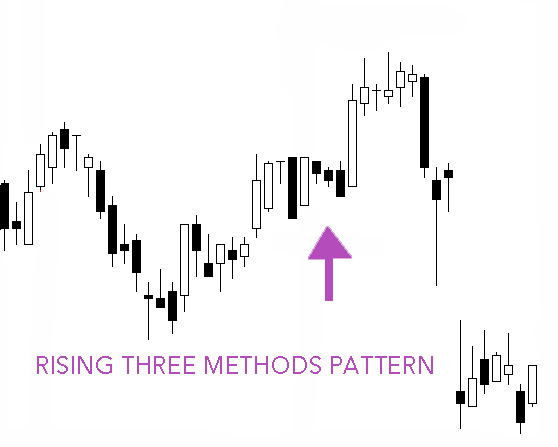 The candles leading up to this Rising Three Methods pattern convey the uncertainty of the investors. Although the bulls hold the reins for a period, forming an uptrend, their upward momentum is followed by a doji and a long, black candle. After the bulls manage to gain control again, the Rising Three Methods pattern materializes. The bulls just can’t catch a break, it seems! However, after the bears make three feeble efforts to push down the price, the bulls seize control once more. After an impressive surge, they continue the uptrend for the next several price periods. Unfortunately, as you can see, their time in the sun won’t last. Sorry, bulls! 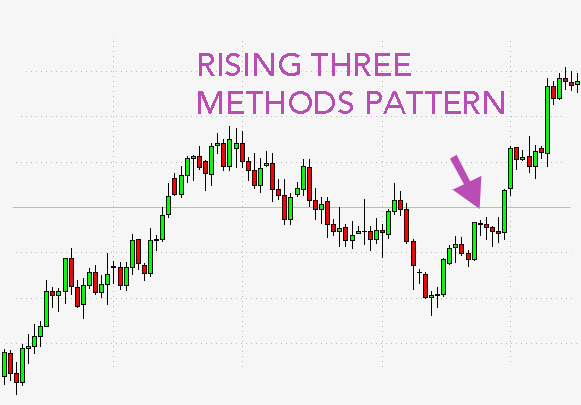 Let’s end with the most mammoth chart. After many sessions, many candles, and many ups and downs, the bulls start to make some progress in their upward march. After two big jumps (and more than a handful of tiny candles), three little red candles and a doji appear. Despite the doji, this arrangement of candlesticks can qualify as a Rising Three Methods pattern. The bears’ feeble effort to push down the price fails unsurprisingly. Two giant green candles follow it, continuing the prior uptrend with great force and confidence. Despite a few sessions of struggle and uncertainty, the bulls have pulled through. The price continues to climb.

Yes, the third time may be the charm where the Rising Three Methods pattern is concerned, but it’s still important to confirm its presence before you make your big move. To confirm this pattern, check that the price trades above the body of the second long green candle. This intimates that the price will continue to escalate for the foreseeable future. By staying slightly cautious, you can avoid making a gargantuan mistake.