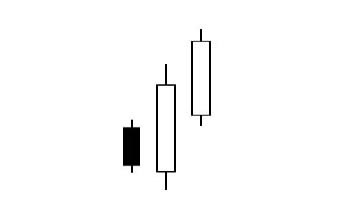 Three Outside Up Candlestick Pattern

Essentially, the Three Outside Up candlestick pattern is comprised of a Bullish Engulfing signal and a confirming candle. It includes just three candlesticks, making it easy to identify and understand. To locate it, check for the following criteria:

The opposite of this pattern (a confirmed Bearish Engulfing) is known as a Three Outside Down.

The bears have controlled the market for awhile, and the first day of the pattern communicates this trend. In the wake of the clear downtrend, however, the bulls seize the reins. Although the second day opens below the prior day's close (appearing to continue the downward trend), the price then surges as the bulls show their strength. This creates an engulfing candlestick, which swamps the price movement of the preceding day. Although some traders will act at this point, confident in the Bullish Engulfing pattern, others will lack courage until the third day, when the bulls push the price higher, creating another white candle. This long candle closes above the previous day's close and proves that the reversal is not a fluke.

To better understand the Three Outside Up signal, review its characteristics. The taller the candles (especially the second, engulfing candle), the more significant and trustworthy the reversal. In addition, the stronger the downtrend at the start, the stronger the reversal. In fact, many investors consider the Three Outside Up to be an undeniably solid signal if it contains a strong downtrend to start and a long engulfing candle within.

Although an Engulfing pattern provides moderate reliability as an indicator of a reversal, the confirmation supplied by a third candle in the Three Outside Up increases the consistency of the signal's performance. So if you spot a Bullish Engulfing pattern, consider waiting for confirmation. That is to say, consider waiting for a Three Outside Up pattern. Good luck!