Inside out, upside down, backwards, forwards  . . . Even when candlestick patterns go topsy-turvy, they have something to say about the state of the market. The Three Inside Up candlestick pattern is a reversal signal composed of a Bullish Harami pattern and a confirming third candle. To better understand this pattern (to turn it right-side out, you might say), scroll down to learn about its formation and meaning. 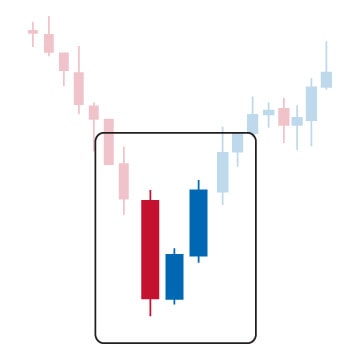 Three Inside Up Candlestick Pattern

To spot a Three Inside Up candlestick pattern, look for the following criteria:

As we mentioned above, this is a confirmed Bullish Harami pattern. The first two candles constitute the Harami, and the third confirms the bullish reversal. Traders are more likely to trust the reversal because of that last candle, which provides assurance.

If you spot a grouping of candles that appears to be the opposite of this one (a large white candle, a small black candle contained within it, and a black candle that closes below the prior day's close), you may have located a Three Inside Down candlestick pattern.

The bears are pushing the price down when we enter the scene. They have control of the market, and the downtrend is extended by the first candle in the pattern. However, the bulls rally and overtake the bears on the second day, halting the downward trend and pushing the price up. This shift, already somewhat persuasive, is confirmed by the arrival of another white candle that soars above the previous day's close.

The steeper the preceding downtrend, the more likely the reversal. The rapid drop in price will not likely be maintained, after all, so a reversal is plausible. In addition, the longer the body of the second candle, the stronger the reversal will be. A long third candle further conveys the strength and potency of the reversal.

Although the Three Inside Up candlestick pattern ends with a confirmation candle, some investors will wait for further assurance. Another white candle, a gap up, or a higher close, for example, would prove that the uptrend has persevered and can be expected to continue. You can decide for yourself how much confirmation you need before you're ready to act. Good luck!