Everyone knows that crows are omens, foreshadowing bad news on the horizon. In the world of Japanese candlesticks, crows take the shape of three descending candlesticks, which form a stairway to lead the price downward. They must appear in a trio, with each candle opening below the previous day’s open. Spotting three crows isn’t a joy in real life, and it’s not a joy in the stock market either. To learn more about the prophecy of the Three Black Crows pattern, flap your wings and soar on down . . . 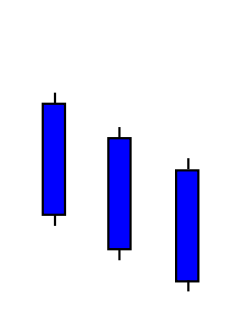 As we mentioned above, the Three Black Crows form a sort of staircase that leads downward, forming over three trading sessions. If you think you’ve spotted this candlestick pattern, look for the following criteria:

First, there should be a prevailing uptrend in progress. Second, there must be three long and bearish (i.e., black or red) candlesticks in a row. Third, each of those candles must open below the previous day’s open. Ideally, it will open in the middle price range of the previous day. Fourth, each candle must close progressively downward, establishing a new short-term low. Fifth and finally, it is important that the candles have very small (or nonexistent) lower wicks.

If you’ve spotted what appears to be the opposite of the Three Black Crows (three long-bodied, white candles that are moving progressively upward), you probably have Three White Soldiers on your hands. This signal indicates a reversal from a bear market to a bull market.

So what does all this mean? After a period of power, the bulls’ strength has waned and the bears are pushing the price downward. For three successful days, they march down those steps, creating a firm reversal. The continual downward movement signifies the vigor of the bears. The negative market sentiment is pushing the price downward, and this strong reversal (shifting from a bull market to a bear market) confirms that the upward price movement has ended. The Three Black Crows pattern is most useful for long-term traders.

To better understand the Three Black Crows you’ve spotted, keep an eye on the candles’ lengths. The second and third candles must be approximately the same size, to show that the bears are firmly in control. If the third candle is clearly smaller than the others, this indicates weakness and the pattern is not as reliable as it might have been otherwise.

Reading a description of a signal’s formation and an explanation of its meaning is a great place to start, but if you really want to understand how a pattern works, you need to view it in its natural habitat. Check out the examples below to test your knowledge of the Three Black Crows candlestick pattern. 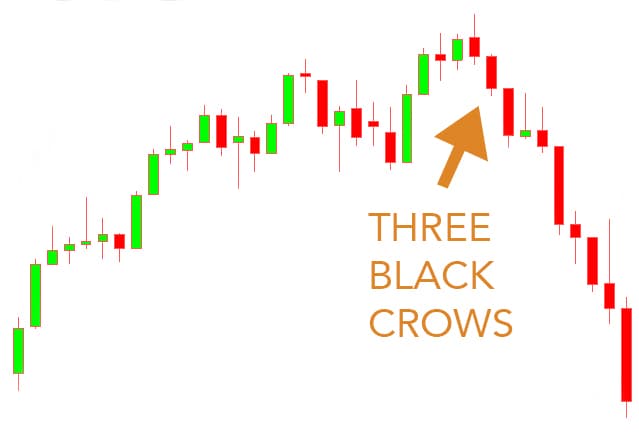 In our first example, the Three Black Crows appear after a brief uptrend. As we move through the pattern, the three candles gain length: the second candle is longer than the first, and the third candle is longer than the second. This progressive lengthening bodes well for the reversal, and as expected, a strong downtrend materializes soon afterward.

In our next example, after some ebbs and flows, a mid-sized uptrend appears. At the top, following a long-legged doji, Three Black Crows land on the chart. They’re similar in size and not particularly lengthy. Although the bears have made a strong showing and exhibited their strength, they fail! This example shows why you should always wait for confirmation. A bullish candle appears after the Three Black Crows, and the price then surges upward in a spirited uptrend. The bears have failed in their quest. 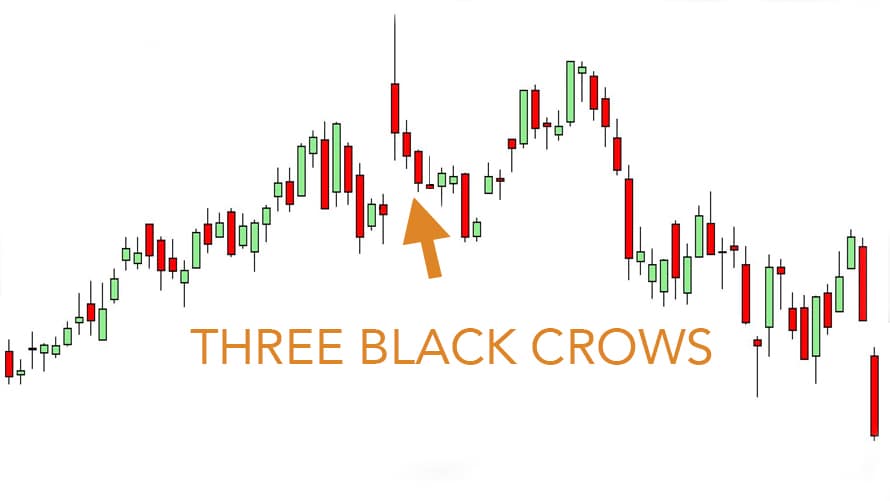 While you’re here, take a look at the four red candles that appear about two-thirds of the way through the chart following an uptrend. Someone might try to claim that this is a Three Black Crows signal as well, but unfortunately, it lacks the overlapping quality of the signal. There are gaps between the 2nd and 3rd candles and the 3rd and 4th candles, disqualifying it. 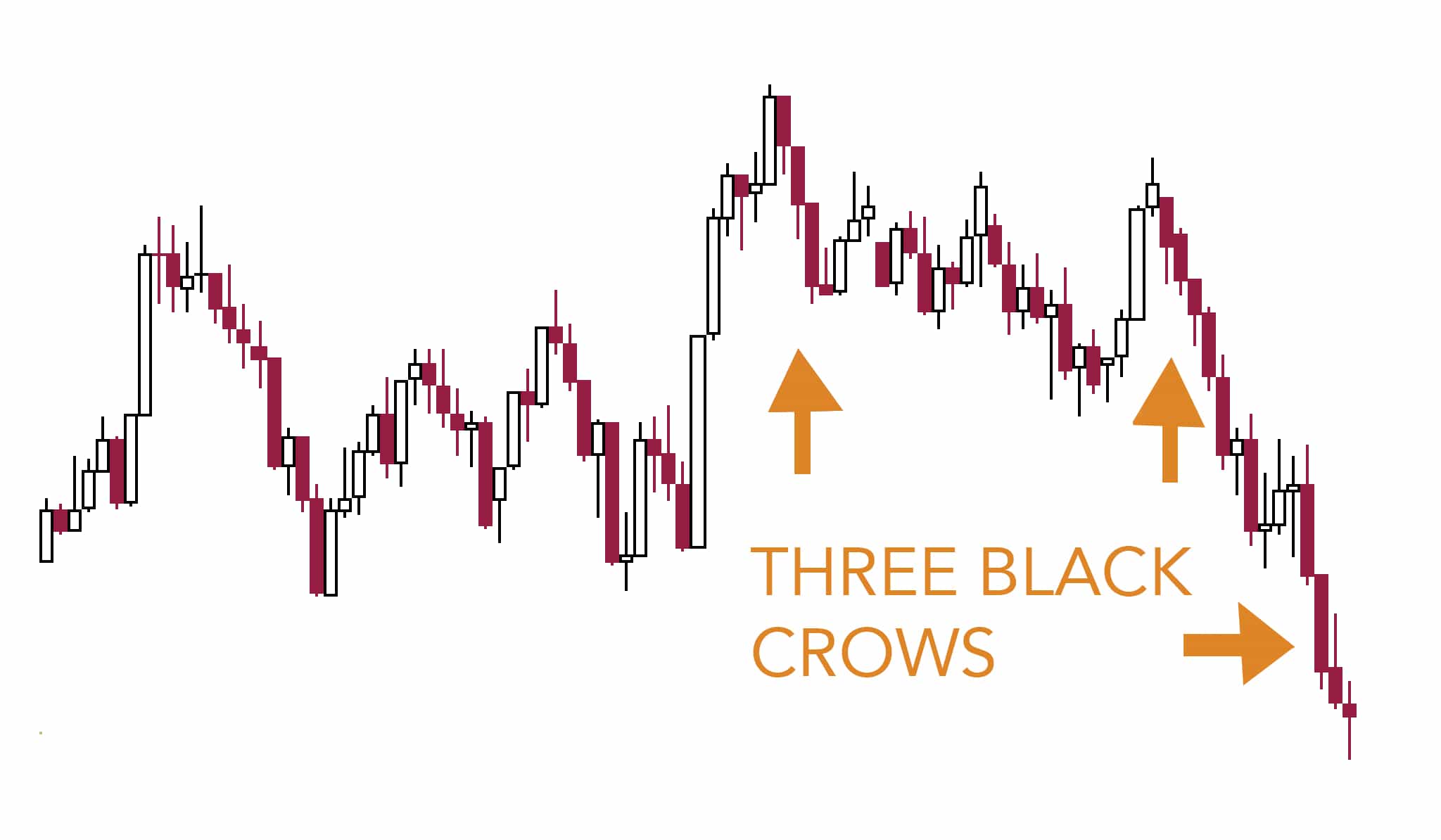 With our fourth example, we’ve hit the mother lode. There are three Three Black Crows soaring through the second half of this chart. The first appears after a noteworthy uptrend: check out the length of those bullish candles! However, this first attempt by the bears to steal the reins fails; a short uptrend occurs soon after.

Following another uptrend, the bears jump in and form what could be considered a Four Black Crows pattern (it might have been a Five Black Crows if the last two candles overlapped). As expected, the price then plummets.

Although the bulls attempt to raise the price again (forming a tiny uptrend), the bears will not let them win. They send in another Three Black Crows. Although we can’t see what occurs after this final iteration of the signal, the last candle of the chart (the tiny red candle) provides a weak form of confirmation. Although this doesn’t guarantee a downtrend will follow, it offers a bit of assurance.

When you spot Three Black Crows, you had better sit up straight and pay attention. This pattern is unusual and powerful. However, before making a rash decision, it is always best to stop and confirm your suspicions that the momentum is truly changing. Good luck!