Did you ever play with spinning tops as a child? Simple but amusing, these tiny toys have existed since antiquity. If they’re spun precisely and very quickly, they remain balanced on their tips due to inertia. In the world of Japanese candlesticks, spinning tops were the inspiration for the naming of the Spinning Top candlestick pattern. Similar in shape to its toy counterpart, with a short body and two long wicks, the Spinning Top is a common but important candlestick signal. To learn more about this unostentatious candlestick, please scroll down . . . 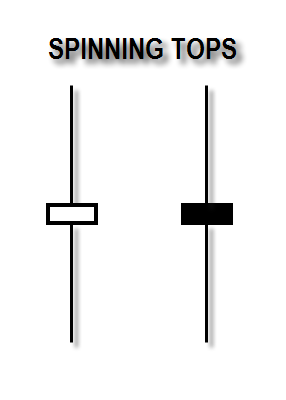 That’s all. Really, it’s that simple. The big question is: what does it mean?

When you think of the Spinning Top candlestick pattern, think of a top toy. When it’s spinning smoothly, you can’t say when it will fall and which way it will point. Similarly, a Spinning Top candlestick pattern represents indecision. During the time period represented, neither the buyers nor the sellers had control. As we can see in the short body of the candlestick, the market hasn’t changed much since it opened. However, we can also see that during the specified time period, the buyers and the sellers both had the upper hand at one point or another, as conveyed by the long upper and lower wicks.

If you spot a Spinning Top after an uptrend or a downtrend, it may signal that a reversal is on the way. The rush of buying or selling is paused for a moment of indecision (represented by the Spinning Top), and that lost momentum could signal that the market has changed its tune.

Spotting a Spinning Top candlestick pattern isn’t difficult. Because it is neither bearish nor bullish but simply neutral, it appears in both uptrends and downtrends. Although both the buyers and the sellers have failed to gain control, they’ve been playing tug-of-war and both sides had the advantage at one time or another during the specified period. Due to this indecision and uncertainty, it is hard to know where the market will head next. Until you have a clearer picture, be careful and don’t make any rash decisions. Good luck!