What do you think of when you hear the phrase "three stars in the South?" The Lone Star State (i.e., Texas)? Your favorite celebrities with Southern roots? The actual "Star of the South," an enormous diamond found in Brazil in 1853? Probably not. If you're a trader, you may not have considered any of these possibilities. Instead, your mind might have raced straight to the Three Stars in the South candlestick pattern, an extremely rare bullish reversal signal. 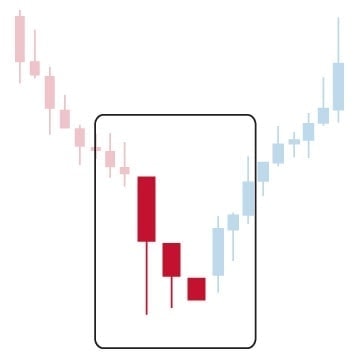 Although your chances of spotting a Three Stars in the South pattern are slim, if you do eventually find one, take heed! You will need to look for the following criteria:

The Three Black Crows signal is similar in formation.

A strong and persistent downtrend lays the foundation for the Stars in the South candlestick pattern. However, a crack appears in this foundation when the pattern appears. With each new candle that materializes in the three-candle signal, the downtrend weakens. The bears' strength deteriorates, and the candles get shorter and shorter, diminishing the power of the downward movement.

Although each day closes lower than the last, the bears are making less progress than they were previously. Each candle engulfs the subsequent candle. Thus, traders predict that the prevailing downtrend will reverse into an uptrend. At any moment, the bulls should step in to raise the price up again. Expect higher prices to soon appear.

When you see Three Stars in the South, you know that change is on the horizon. As the downtrend deteriorates, the chance of a reversal heightens. Although this isn't a particularly reliable bullish reversal pattern, it proves tremendously uncommon. So if you happen to see it, thank your lucky stars!

In addition, check for confirmation by waiting for the price to cross above the midpoint of the last black body. When you see this, you can confidently assume that the bulls have taken control of the reins and an uptrend will progress.