Isn't it convenient when a candlestick pattern's name corresponds directly with its appearance? The Three Gaps Down pattern has (fittingly) three distinct gaps that appear within a downtrend. The pattern is sometimes known by the Japanese word sanku, but do yourself a favor and use the English name to ensure that you remember it! This signal indicates that a reversal is on the way, and although it isn't terribly well known, it is certainly worth adding to your repertoire. To get started, scroll down and review the signal's formation and meaning. 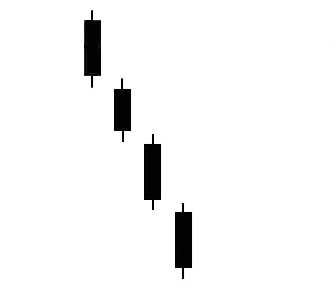 First, a clear and well-defined downtrend must be in progress. Second, there must be three gaps (as you might have guessed) within the downtrend. A gap is an unfilled space or interval between the bodies of two candlesticks, and it tells you that no trading has occurred within that specific window of time.

Most signals have more requirements, but these two criteria are all that you need to establish the presence of a Three Gaps Down pattern. Take a look at the picture above to see an example of the pattern in which all three gaps are consecutive.

So that's all well and good, you might be thinking, but what does it mean? For four days, the bears are in control and the price is dropping. The three gaps show the force of the descent. However, after this strong display, it should come as no surprise that the bears have exhausted themselves. The market is now expected to reverse, allowing the bulls to take control.

To improve the Three Gap Down pattern's reliability, combine it with other technical indicators that also point toward a reversal.

As always, we urge you to check for confirmation before proceeding. When you notice a Three Gaps Down pattern, look for the price to rise, reaching at least the midpoint of the last body, to confirm the trend's reversal. Good luck!