Also known by the Japanese word sanku, the Three Gaps candlestick pattern contains (surprise, surprise!) three distinct gaps. Although there are two different versions of the signal (one bearish, one bullish), today we're focusing on the Three Gaps Up pattern, which looks like a small staircase with gaps between some of the gangly stairs. This strong, defined upward trend may indicate that a reversal is on the way. Although the Three Gaps Up pattern isn't a tremendously popular signal, its simple message should not be overlooked. To better understand its arrangement and significance, simply scroll down. 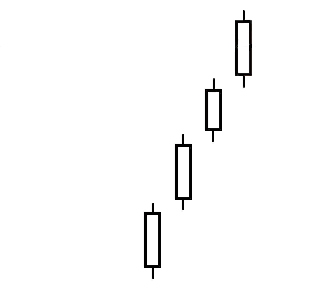 First, a well-defined upward trend must be in progress. Second, there must be three gaps (hence the name) within the uptrend. A gap, by the way, is an unfilled space or interval between the bodies of two candlesticks, and it indicates that no trading has occurred during that window of time.

That's it! That's all there is to it. Ideally, however, the gaps will be close together and the candles will all be white. The image above shows a lovely example in which the three gaps are consecutive and all four candles are bullish.

So what does this all mean? Well, for three days the bulls are in control, and the price flies upward, gapping between sessions. The market is overbought, and exhaustion is inevitable. After all that climbing, the market will likely reverse, allowing the bears to take the reins. Thus, when you have spotted all three gaps, you can safely assume that a reversal is on the horizon.

To improve the Three Gaps Up pattern's reliability, don't rely solely on it. Instead, combine it with other technical indicators that point to the same conclusion.

Finally, any trader worth his or her salt knows how crucial it is to check for confirmation before pressing onward. So if you spot the Three Gaps Up pattern, look for the price to fall, reaching at least the midpoint of the last white body, to confirm the trend's reversal. If it fills the last gap, you can be certain a reversal has occurred. Good luck!