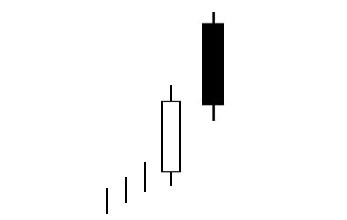 Two candles form the Bearish Meeting Lines signal: one black and one white. Look for the following criteria to identify it:

As we mentioned above, there is a bullish version of this pattern in which the black candle comes first, but the candles still meet at the close. To learn more about that signal, review this previous blog post. The Bearish Meeting Lines is also similar to the Dark Cloud Cover pattern, which forms during an uptrend and also features a white candle followed by a black candle. However, in a Dark Cloud Cover signal, the candles do not close at the same place.

So what's happening during a Bearish Meeting Lines signal? To start, the market is bullish, an uptrend in progress, and a white candle continues this upward movement. The following day, the market opens sharply higher, forming a gap up and bolstering the bulls' confidence. However, the price then dips, closing at the same place the previous day closed. A stalemate has occurred between the bulls and the bears.

Some call the Bearish Meeting Lines candlestick pattern random, because despite its bearish disposition, it acts as a bullish continuation pattern approximately half of the time. The signal is most significant if it occurs after a prolonged uptrend.

As it requires a very specific and precise configuration, the Bearish Meeting Lines pattern occurs very infrequently. When you do spot it, as with all candlestick patterns, be sure to confirm its forecast before making significant trades in response. To do so, watch for the price to cross below the last close. Good luck!