Most Japanese candlestick patterns require specific candles in order to exist at all. For example, they might call for a black candle or a white candle, a tall candle or a short candle, a candle with no wicks or a candle with two wicks, or some combination thereof. The Tweezer Top candlestick pattern is unique in that it only requires that the two (or more) candles involved have the same high point. Beyond that trait, the candles can look quite different. This distinguishing feature means that the Tweezer Top candlestick pattern will appear in a different form nearly every time you see it. Interested in learning more about this shape-shifting signal? Let’s dig in . . . 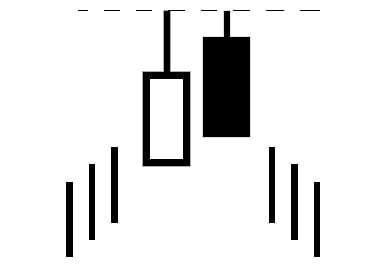 To identify this bearish candlestick pattern, you’ll need to spot the following (very flexible) criteria: First, there must be two or more adjacent candles of either color. Second, a clear uptrend should be present. Third, those candles must reach the same high point.

That’s all there is to it! Finding two or more candles side-by-side of either color is a given, of course, but it is the identical high points that allow you to pinpoint the presence of a Tweezer Top candlestick pattern. In a Tweezer Top, the highs are the most important factor. Although you shouldn’t completely disregard the body color and the shape of the candles, they aren’t critical components.

If you spot the opposite of this pattern (a downtrend followed by multiple candles that reach the same low point), you’ve found a Tweezer Bottom candlestick pattern, which is a bullish reversal signal. To learn more about that signal, please review our blog post dedicated to Tweezer Bottoms.

The height of the upper shadows signifies an area of resistance. Although the bulls were pushing the price higher, they aren’t willing to buy above the highest price. So the bears force their way into the action, returning with great force, and drive the price back down. The identical height of the topmost candles shows the strength of the resistance and indicates that the uptrend will either pause or reverse, forming a downtrend.

This signal is viewed as a minor, short-term reversal pattern. So although the price could delve into a significant downtrend, it probably won’t. More likely, it will move downward gradually. To learn more about its meaning, look for the following characteristics:

Most candlestick patterns have a fairly strict criteria, so their various iterations tend to look somewhat similar. As we mentioned above, Tweezer Top patterns are unique in that they come in a variety of forms, as you can see in the three examples above. To help you catch this pattern in the wild, we’ve assembled three different examples of it. In each example, we encourage you to try to spot the Tweezer Top on your own (without relying on the arrows, if possible) and then anticipate what will follow. With a little practice, you can add this candlestick pattern to your repertoire. 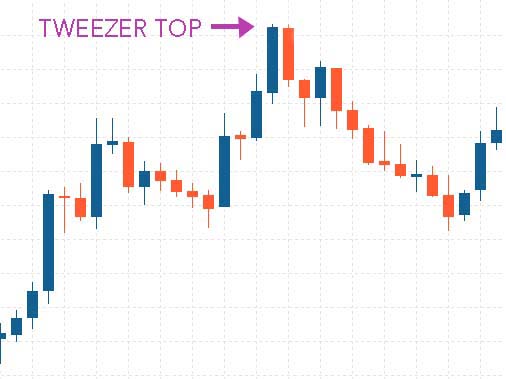 In this first example, the bulls succeed in lifting the price despite one minor setback (in the form of a downtrend that mostly moves sideways). The peak of the uptrend conveys a point of resistance; the bulls are not willing to push above that price. At this point, the bears step in and grab the reins. Although the bulls have the strength to push back shortly after, they can’t stop the bears from introducing a downtrend. Only at the very end of the chart do the bulls reenter the scene as leaders. 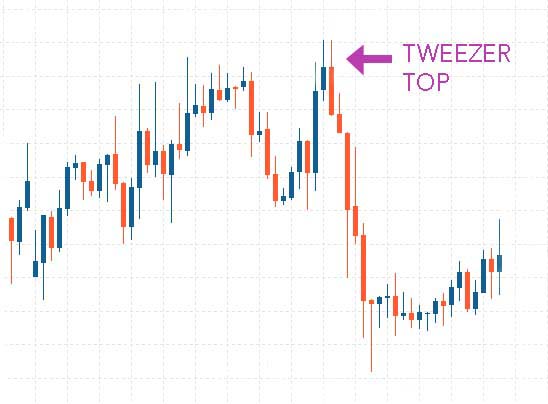 This chart conveys a longer session with more jumps and dips. The price hops around during the first half of the chart; though it moves gradually upward, the ascent doesn’t go smoothly, and it plunges again at the end. When we finally reach the top of the chart, the bulls strain to move the price higher. As conveyed by the second topmost candle, the price begins at the same place it closed the previous day. The bulls desperately push the price higher at first, but it descends again, forming a red bearish candle. The reversal is stronger than expected, plummeting down like a roller coaster.

For our final example, we have a double act. When the curtain opens, the bulls are steadily climbing upward. At the summit of this mountain, the price reaches the same high point two days in a row. The second candle’s body is smaller than the first, forecasting a stronger reversal. And indeed, the price moves steadily downward after the Tweezer Top pattern appears. The two candles at the bottom of the chart reach the same low point: the first with its wick, the second with its body. This forms a Tweezer Bottom candlestick pattern. The signal heralds a short-term reversal in which the bulls seize the power once again. Onward and upward!

The Tweezer Top can be extremely helpful to traders, because it visually indicates that power is being handed from the bulls to the bears. It’s also very easy to spot. To confirm a Tweezer Top candlestick pattern, look for the price to trade below that highest point (the level of resistance). Finally, don’t forget that more than two candles can be present in a Tweezer Top – the more, the merrier!